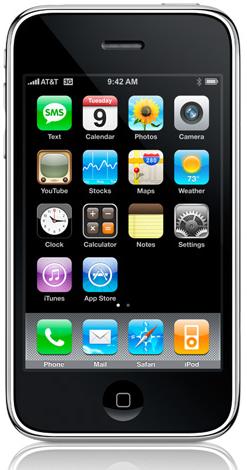 This morning I decided to take public transit to work so that I could watch part of a movie that I'd converted to iPhone format on the way. I'd been looking forward to watching Lakai Fully Flared for some time. I figured I'd travel light today and didn't bring my blue messenger bag, just my AskJeeves lunchbox and my iphone+headphones. Caught muni at Castro to head downtown. The train was not very full, I think I got the last seat and there were a few people standing. I put my lunchbox on my lap and started watching my movie.

We go one stop to Church, doors open. I'm all wrapped up in my movie at this point. All of a sudden a hand from behind me grabs the iPhone and it's gone. At this point I was lucky to get to see a part of me that isn't usually expressed. I think of myself as a thoughtful guy who's pretty laid back so what followed was a surprise.

The second the phone leaves my hand I jump up, lunchbox falling to the ground and run outside the train to see the guy who grabbed my phone running from the train. He's only about 6 feet from the train door at this point since I jumped the second the he grabbed the phone. I jumped on his back and got my arm around his neck tackling him to the ground. We slide up against the brick wall that makes up the stairs going up at Church. I bring my other arm around and push his face into the corner of the wall and the ground with my elbow. At this point I terrified myself a bit as I'm on top of him screaming at the top of my lungs "Give my fuckin phone back bitch!". I grab the phone which is wedged between him and the ground and pry it from his hands as he says "Oh I'm the bitch nigga?!" I stand up with him still on the floor, now with phone in hand and begin walking back to the train briskly in order to not miss it. I'm looking down to check that I haven't gotten hurt or torn my clothes or anything. Before getting to the door of the train I turn and the guys still on the ground in the corner and I yell "Fuck you!" which after doing it I felt may have been a bit overboard as it echoed through the massive concrete station.

I then turned back and stepped onto the train, for the first time looking up to see a train full of people staring mouths agape. I'm immediately embarrassed since an outburst like that is clearly outside of the allowed social interactions on the morning commute muni. I manage a somewhat silent "Sorry" as I walk back on the train, in the same almost inaudible voice one uses when saying "Excuse me" in order to get up from a seat or to sit down if someone's in your way. I walk back to my seat where my lunchbox is on the ground and everyone is talking to each other. Some guy says "Well done!" and the whole car erupts in applause. I sit down and begin checking out my phone to see if it's destroyed but it's fine. Someone else on the train says above the murmur of conversations "That should be an Apple ad" and everyone laughs.

I've got my phone. Headphones are a little jacked up and I've got a bloody forehead and knuckles but not that much worse for wear. I guess my findings from this event are :